Nigel Thomson was a man who loved life and the arts. As an artist and as a teacher, he was an inspiring and totally committed individual whose uncompromising intelligence was balanced by an excellent sense of humour.

Thomson was born at Cremorne, Sydney on 30 November, 1945, the second child of Airdrie and John Thomson. He grew up in Mosman and attended the Sydney Church of England Grammar School at North Sydney. While still at school, he studied drawing and painting in the evenings at the Julian Ashton Art School.

After completing his Intermediate Certificate in 1961, he worked in advertising agencies, learning drawing and design at evening college before commencing full-time study at the Ashton School. He studied under Henry Gibbons and Dick Ashton and met fellow students Paul Delprat, Max Miller and Salvatore Zofrea. His mother Airdrie, who encouraged his artistic pursuits, had a studio built for him behind their house in Mosman.

Early years in Sydney and Perth

At age 22, Thomson held two solo exhibitions, the first, his debut, at the Chippendale Gallery in Regent Street in July 1967, and another at the Stables Gallery in Pymble in November the same year. A long-term plan to work his way to Europe saw Thomson leaving Sydney for Western Australia in 1968; his first long stop was Pinjarra where he became the art master at Pinjarra High School until December 1969, when he moved on to Perth.

In a rented garage on the Swan River, Thomson developed the strict daily painting routine that he would adhere to for the rest of his working life. During the Perth years, he taught in the evenings at Perth Technical College and held his first Western Australian exhibition at the Old Fire Station Gallery. He was an active member of the WA branch of the Contemporary Art Society, becoming its president in 1970 and developing many enduring friendships and associations. While continuing to exhibit with CAS, he was included in a group show at the Skinner Gallery, where he also held a solo show in October 1972. He won the Bunbury City Art Purchase Prize, the Thornlie Art Prize, the Tasmanian Art Gallery Prize and the Borthwick Art Prize and would demonstrate his strong affiliation for the region by several return visits for work and exhibitions throughout his career. 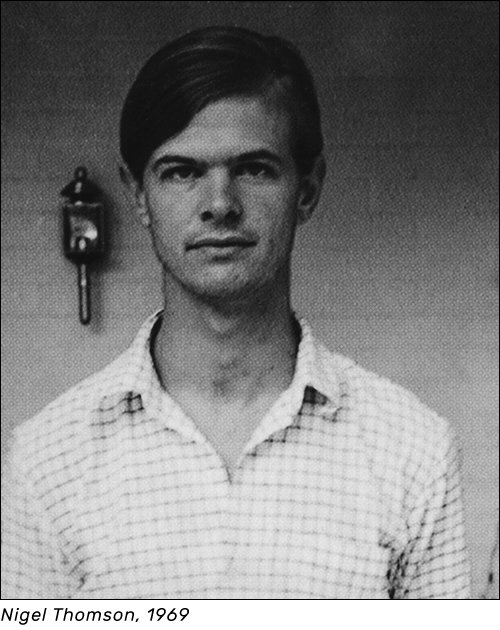 Thomson’s time in Perth was important for other reasons: the nine weeks he spent as an orderly in a hospital for the mentally ill profoundly influenced his work; the ABC commissioned him to make a short film; and his love and knowledge of classical music gained him a position as a programmer at ABC Radio. He was also the subject of an educational television program made by Channel 7 in Perth.

London and The Hague

Early in February 1973 Thomson left for London, where he rented a flat-studio in Islington in an area that was being demolished; his was one of the only rows of terraces left, a bizarre situation that prompted him to name the studio the Bureau of Psycho-enigmatic Enquiries. He quickly established a relationship with the Nicholas Treadwell Gallery in London, exhibiting in a group show there in 1973. In August he moved to Holland, settling at Bergen aan Zee and  establishing contact with Gallery Amsterdam.

By May 1974 Thomson had settled in The Hague, where he lectured part-time at the Koninklijke Academie van Beeldende Kunsten (Royal Academy of Art); once more he developed strong friendships with colleagues and students. He continued to exhibit in group shows at the Nicholas Treadwell Gallery in London, and also at the Paris, Berlin, Basel, Cologne, Brussels and Dusseldorf international art fairs.

In October 1977 he returned to London, and spent the next two years exhibiting in England and Europe and travelling between London, Sydney and Perth. In February 1979 he exhibited at Treadwell Gallery with two other artists; this was his final show while living in London, however the Gallery continued to exhibit and sell his work up until his death.

Early in March 1979, after six years in Europe, Thomson returned to Australia, where he worked for a short time teaching at Scots College, Bathurst, before returning to Sydney by the end of the year. Here he settled in a flat in Manly where he would live and work until his death in October 1999. Soon after his arrival, his work received important recognition in Australia when his painting Bride attacked by shark was selected for hanging in the 1979 Sulman Prize at the Art Gallery of NSW.

The following year, Thomson began part-time teaching at the Julian Ashton Art School. Around the same time, Thomson established the Manly Art Group, at which private classes ran one day a week for the next eighteen years, attracting not only local students but also those from all over Sydney. In 1990, the quality of his students’ work was recognised in a 10th anniversary exhibition at the Manly Art Gallery & Museum. 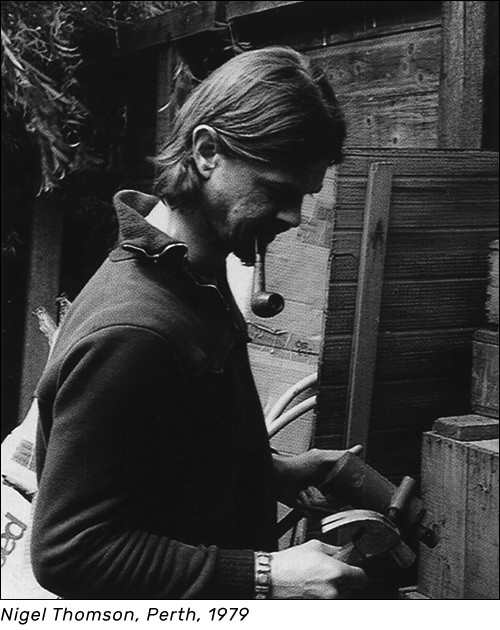 The 1980’s brought Thomson renewed success and recognition in various ways. In 1980, Picnic, hung in the Sulman Prize, attracted media attention because of the minor controversy of its subject matter: a party of elegant picnickers partaking of barbecued cat. In 1981 his painting of former fellow student Max Miller holding a gun, entered in the Archibald Prize also aroused media interest. Thomson would often use friends and associates as models in his paintings, which became increasingly controversial. Miller also introduced Thomson to art dealer Chandler Coventry, and in May 1981 he held his first solo exhibition at the Coventry Gallery in Paddington, followed by two more over the next 18 months.

In 1983 Thomson achieved a rare double: his portrait of Chandler Coventry was selected as winner of the Archibald Prize, and Marat, the unsophisticated will be shocked at the depiction of your death: or, the artist answers his critics won the Sulman Prize. The next year Children’s rites was chosen by Arthur Boyd for inclusion in the Sulman Prize, but was removed from the exhibition after opening night because its subject matter – a group of children dancing around a naked man at the centre of a may-pole – was deemed pornographic by the Gallery trustees. Excitement was generated in the media, anti-censorship and civil rights advocates became involved, and Thomson was subsequently invited to be a guest speaker at the Art Educators of Australia Biennial Conference.

Subjects of other portraits by Thomson in the 1980s included Thelma Clune (hung in the Archibald Prize, 1984), businessman John Schaeffer, Susan Sangster (a commisioned portrait that also attracted media interest when the subject refused to pay), author Kate Grenville, Nick Whitlam and his family, and Perth businessman John Bond and his family. In 1985 Thomson was included in ‘A Survey of Australian Portraiture 1921 – 1983’ at the S. H. Ervin Gallery.

Early in 1985 Thomson began painting his State Institution Series, paintings inspired by his time spent working in the Perth mental hospital. Later the same year he travelled through Europe on a guest lecture tour organised by the Australian Embassy, Vienna. This included lectures at Ljubljana University in the former Yugoslavia, Klagenfurt University in Austria, the Hungarian Artists Society in Budapest, the Royal Academy in The Hague and Boston University in the USA. In the same year he spent six weeks in Perth as Artist-in-Residence at Claremont TAFE, while continuing to work on the State Institution Series which he exhibited in October at the Robin Gibson Gallery in Paddington, Sydney. State Institution from this series was selected as joint winner with Wendy Sharpe’s Black Sun – Morning to Night for the Sulman Prize, judged that year by Albert Tucker. 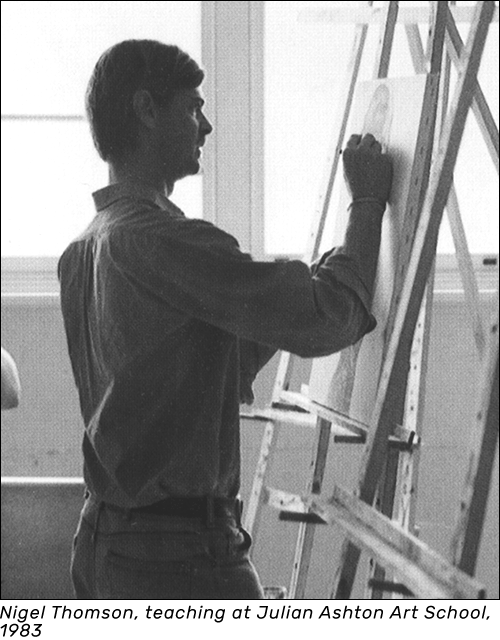 Thomson's passion for music and opera were expressed in two works of this period written in collaboration with musician Struan Smith: the musical ‘Vincent’, based on the life of Vincent Van Gough, was performed in Bathurst in 1986 and work-shopped by the Elizabethan Theatre Trust; while their ‘Aboriginal Oratorio’ was performed in Bathurst as part of the Bicentennial celebrations. Thomson wrote the libretto for both works, Smith the music.

In 1988 Thomson exhibited his Graeme Thorne Series at the Robin Gibson Gallery. These ten paintings, based on the Graeme Thorne kidnap and murder case of 1960, arose partly from Thomson’s feelings of personal connection to the story (the boy’s body had been found in an area of bushland in Seaforth where Thomson played as a child) and partly from fascination with the media’s role in sensationalizing the crime. Shortly after, he began work on a similar theme, drawing on the Myra Hindley Moors murders in the UK; however during a period of crisis he destroyed all of these works. 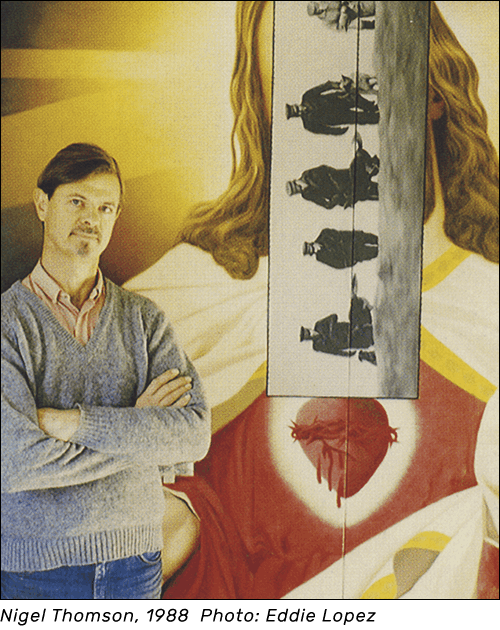 In the late 1980s and early 1990s, Thomson continued to be hung regularly in major art prizes and to be exhibited in galleries in Melbourne, Armidale, Campbelltown, the Gold Coast and his own suburb of Manly. A grant from the Australia Council in 1991 allowed him to prepare works for a solo exhibition at the Charles Nodrum Gallery in Melbourne in 1992. The Manly Art Gallery & Museum acquired Tunnel in 1993.

Thomson's 1995 portrait of Manoly Lascarus, companion of Patrick White, was hung in the Salon Des Refuses at the S.H. Ervin Gallery; later that year he travelled to the Venice Biennale, then to Holland and England and finally to New York City. On his return he commenced work on the Sunset Series, uncharacteristically small works numbering thirteen. He took photographs and made drawings of the writer Barbara Blackman in preparation for the 1996 Archibald Prize, however he deferred entering the competition after being diagnosed with cancer. After recuperating from two major surgical procedures he continued to work on the Blackman portrait and his Sunset Series. He was also interviewed for the television documentary ‘Brushes with Fame’, which followed the artists and their entries for the 1997 Archibald Prize. 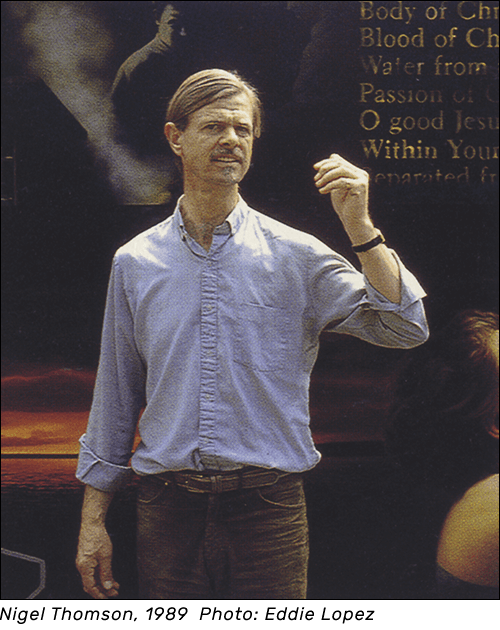 After undergoing chemotherapy Thomson resumed painting, completing the Blackman portrait one week before the deadline and winning the Archibald Prize for a second time in March 1997. In April, he exhibited twelve of the Sunset Series paintings at the Annandale Galleries in Sydney.

Despite his illness, Thomson continued to paint and be active in the art scene. He was appointed an Australia Day Ambassador in 1998, and was also included in the NSW Australia Day Exhibition. In March he was guest speaker at the Premier’s Victorian Certificate of Education Awards, Victoria, and in July held a solo exhibition at Annandale Galleries, showing eleven major works completed between 1993 and 1998. By September a further diagnosis confirmed the existence of cancerous metastases, this time inoperable.

Determined to keep working and pursue his interests, Thomson wrote a novel, his memoirs, and collaborated again with Struan Smith on an oratorio based on the Snowy Mountain Scheme, which they hoped would be performed on the 50th anniversary of the Scheme’s beginning. He continued to paint: his final work related to his illness and treatment. During this time, although physically debilitated, he continued to be passionately engaged with his friends, family, art, books and current events until the day of his death. Lucid and fiercely independent until his last moments, he died reluctantly on 6 October 1999.

Late that year the National Gallery of Australia in Canberra displayed three of Thomson’s paintings as a tribute to his life and work, accompanied in January 2000 by a lecture presentation on his oeuvre. In May, the Manly Art Gallery & Museum also held a tribute exhibition, ‘Nigel Thomson (1945 – 1999)’ which coincided with the unveiling of a plaque in his honour. In December, Graeme Thorne 1 was included in the exhibition ‘Federation: Australian Art and Society 1901 – 2001' at the National Gallery. In late 2004, a survey exhibition, ‘Nigel Thomson Critical Realist’, curated by John McDonald, was held at Manly Art Gallery & Museum. This exhibition later toured to Maitland Regional Gallery, New England Regional Art Museum and Campbelltown City Art Gallery. 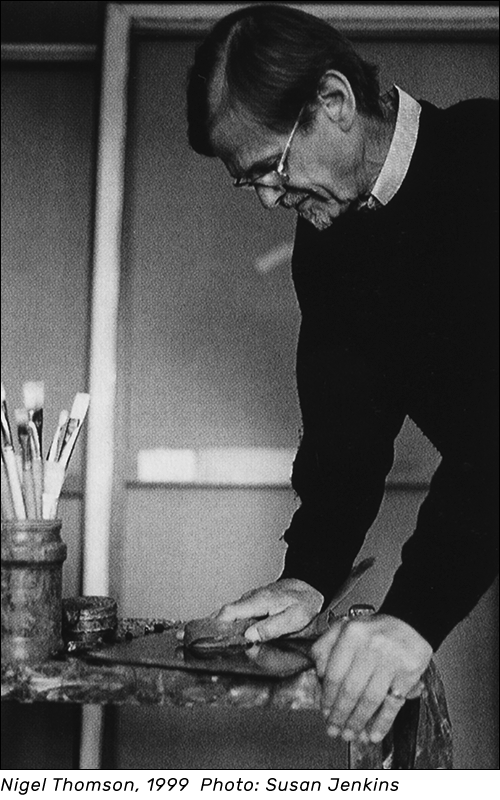 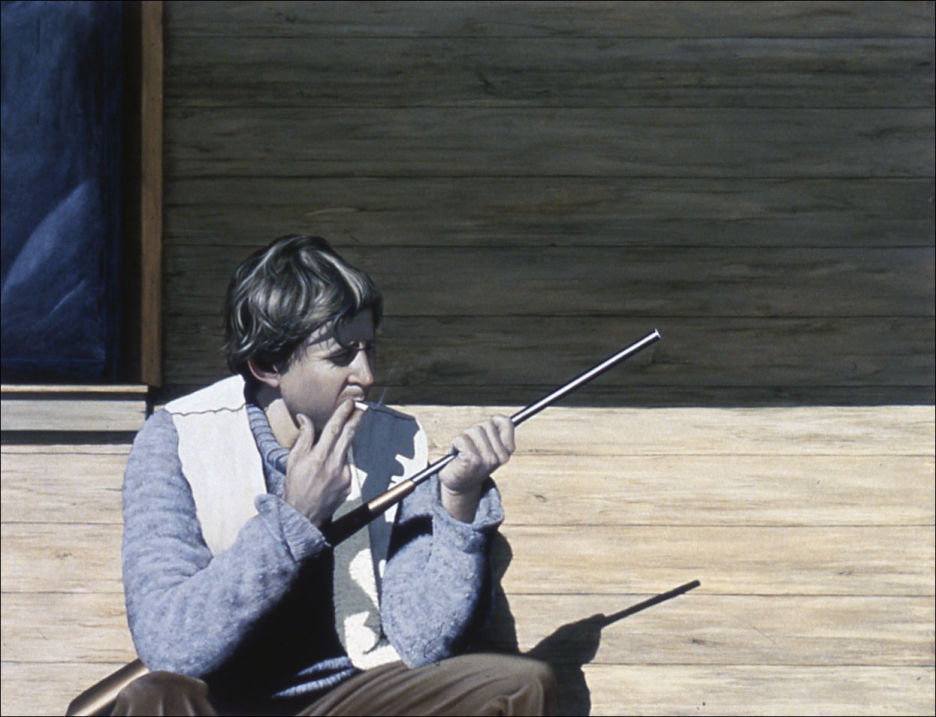 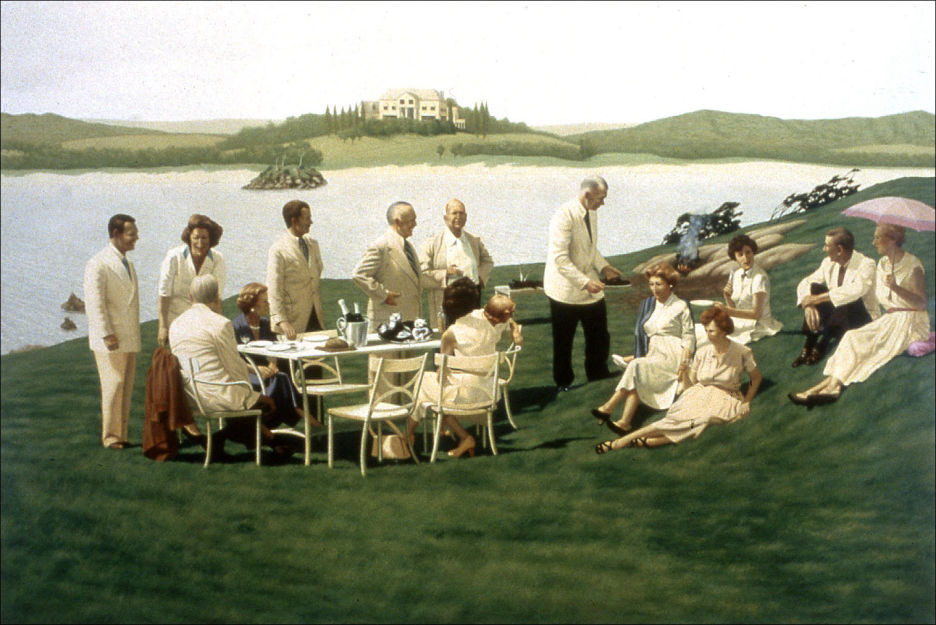 Marat, the unsophisticated will be shocked at the depiction of your death, or, the artist answers his critics 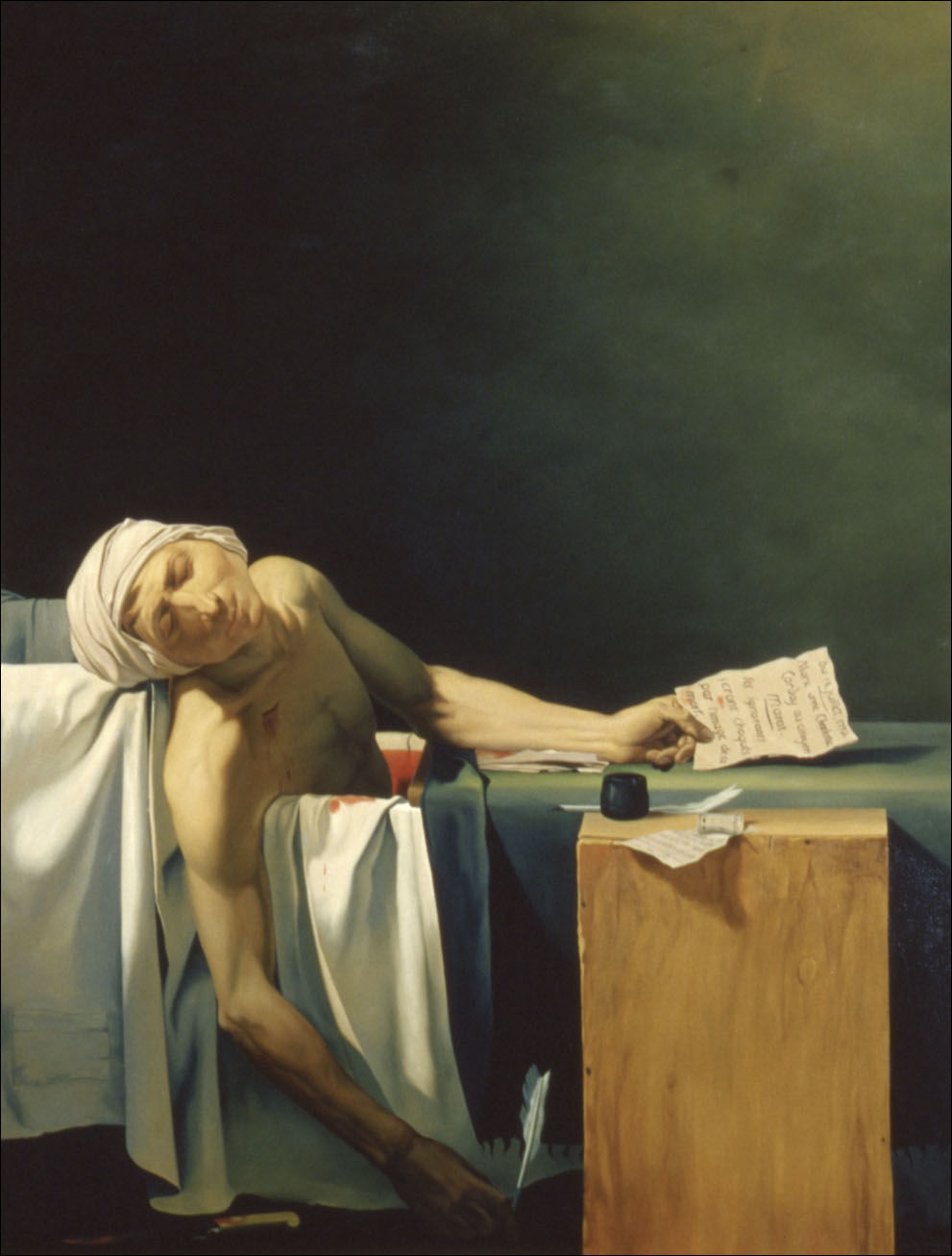 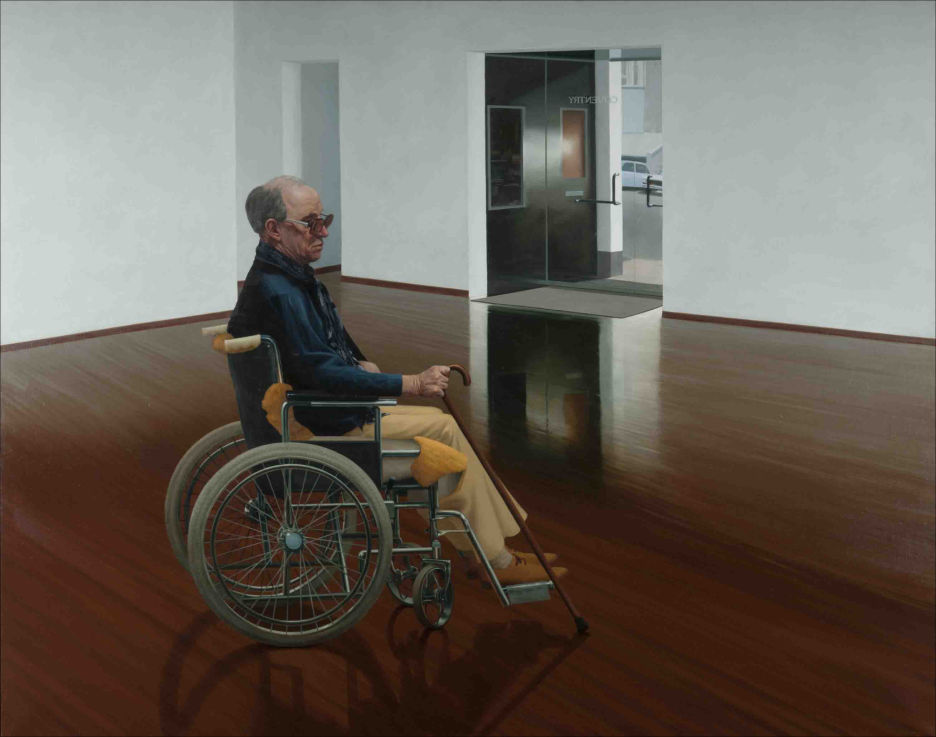 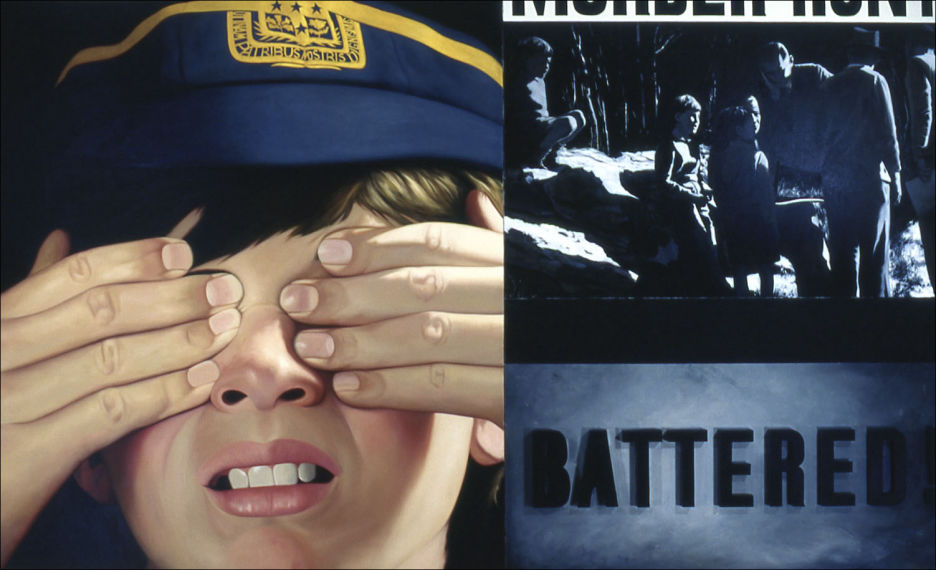 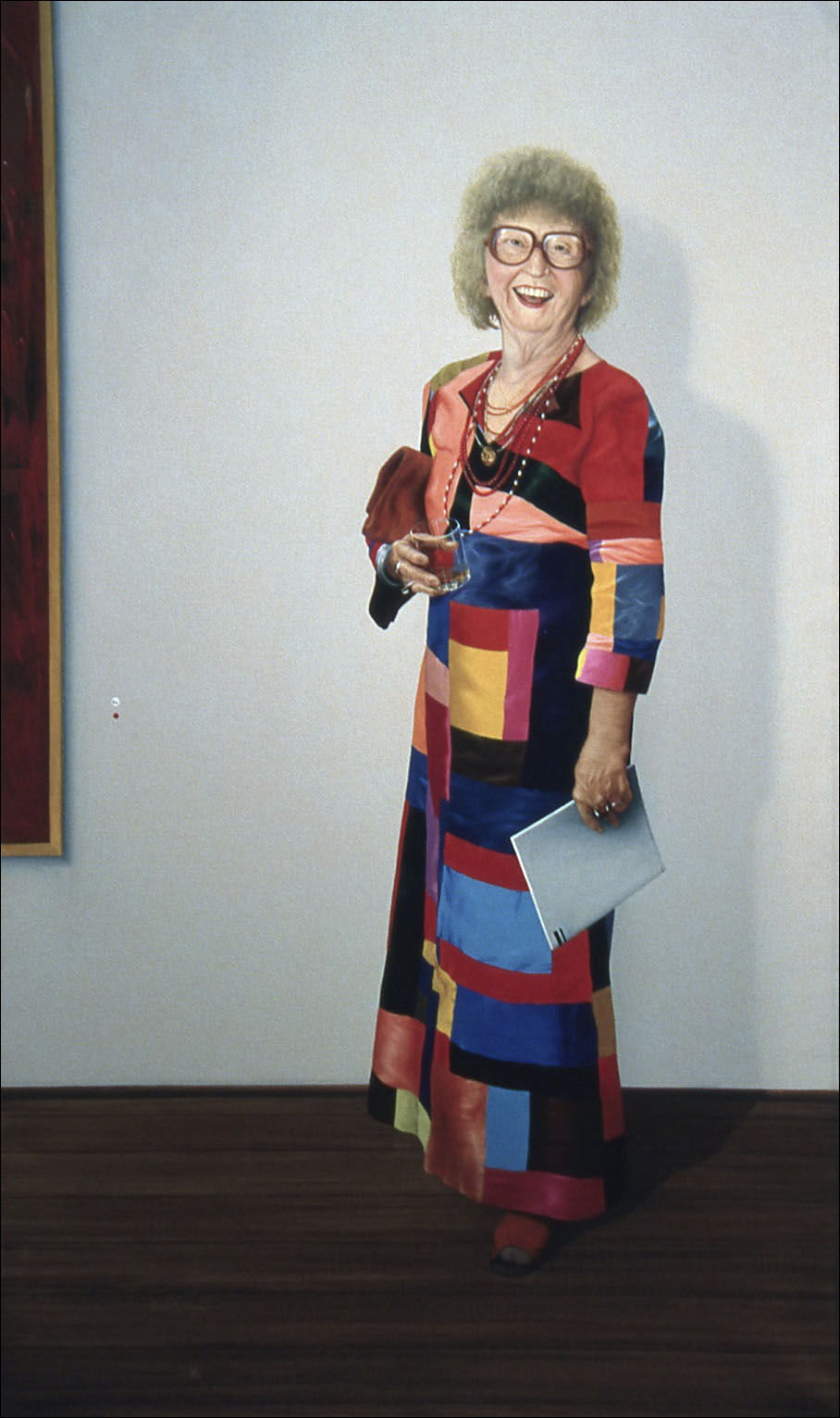 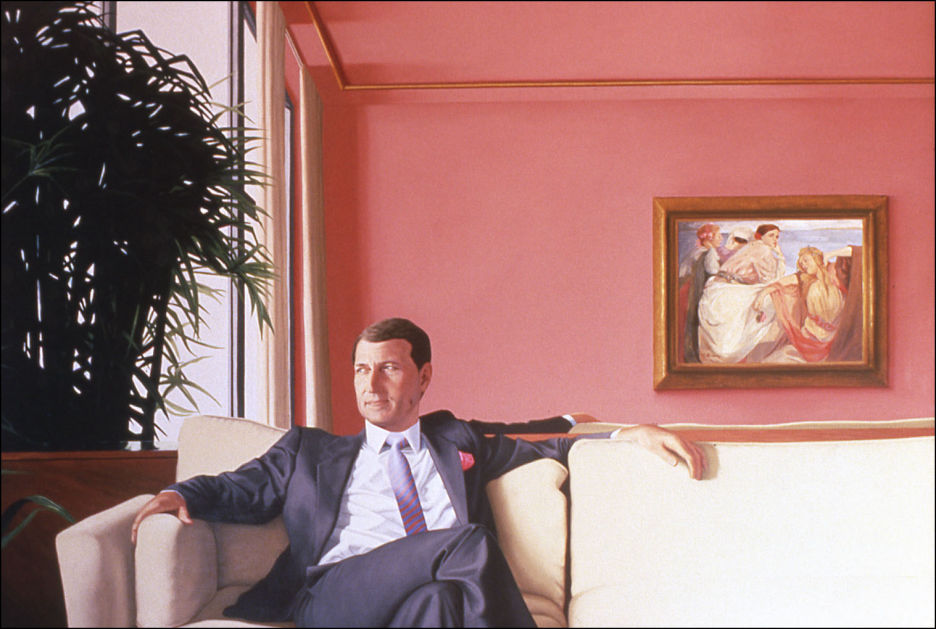 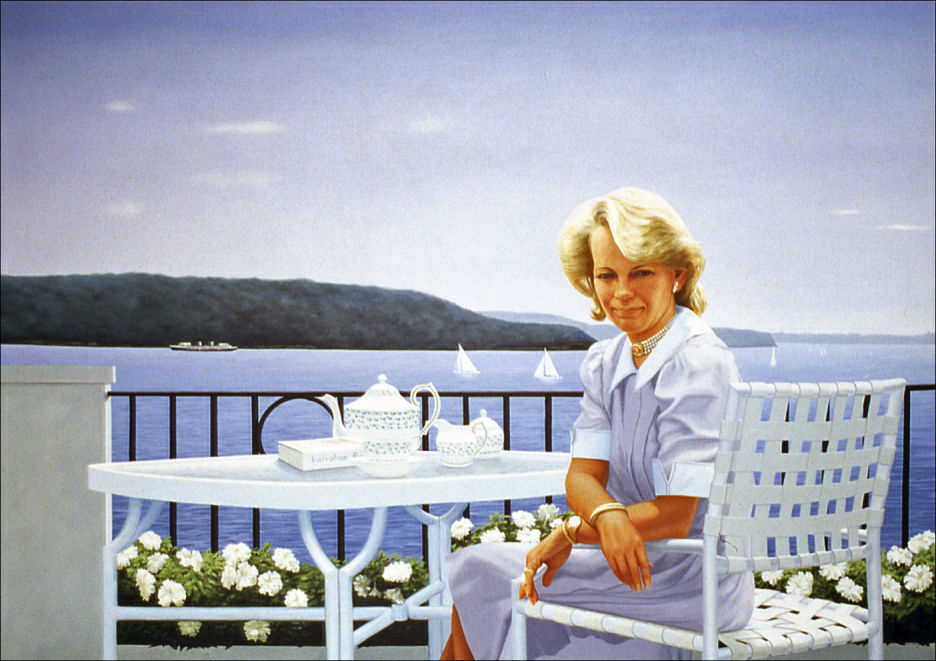 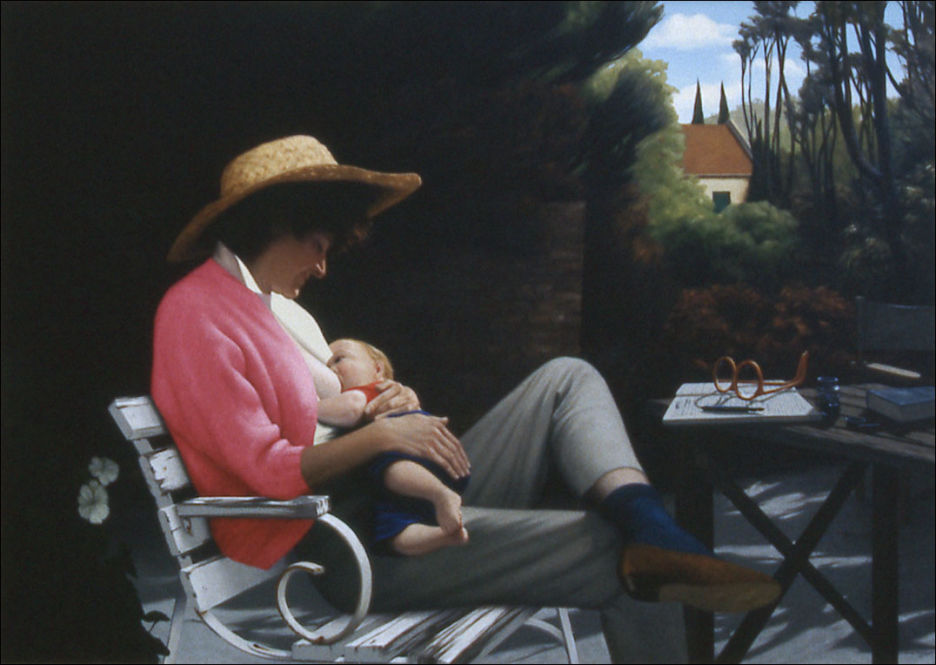 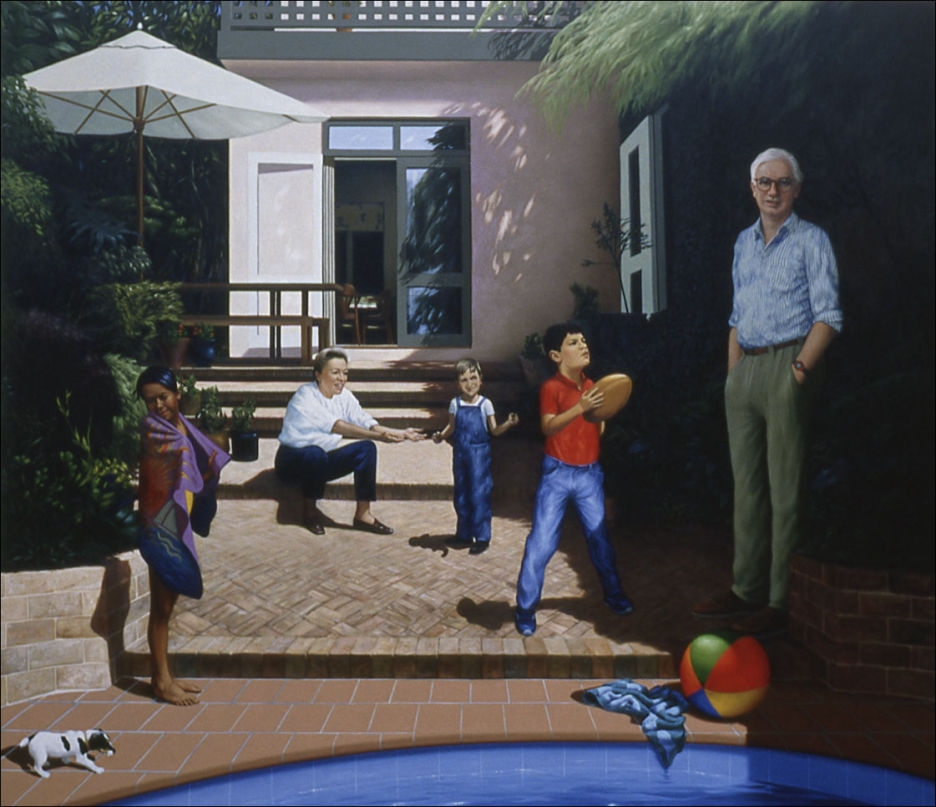 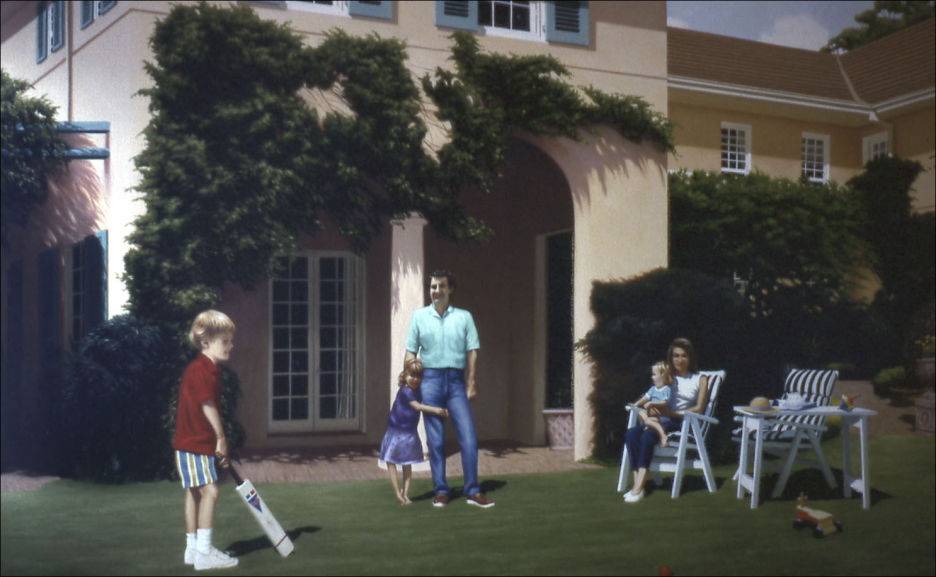 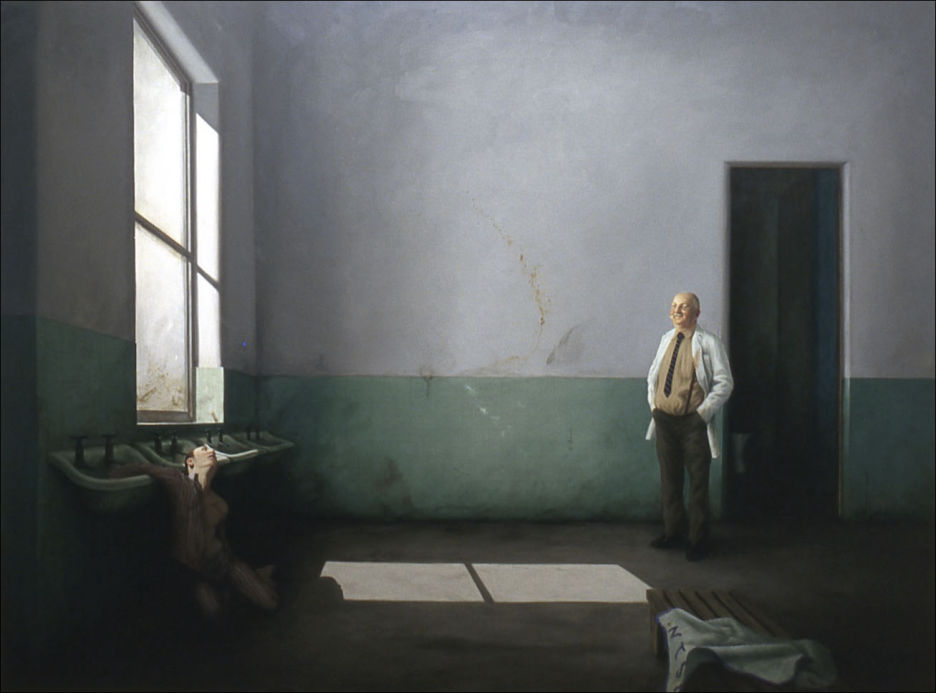 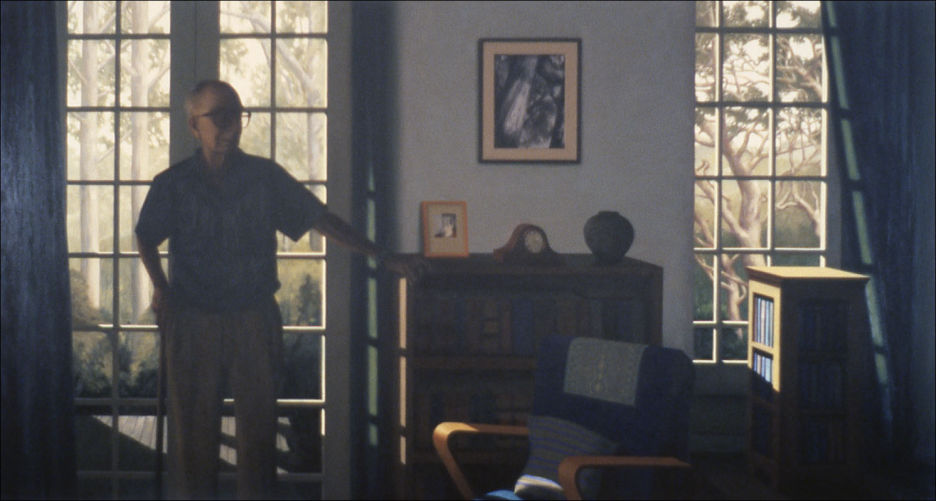 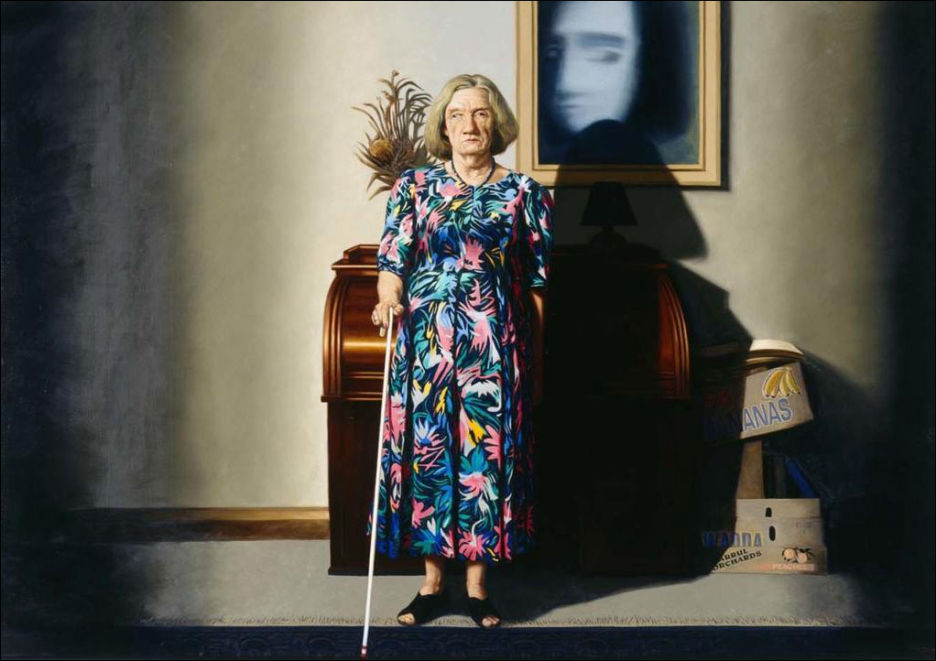 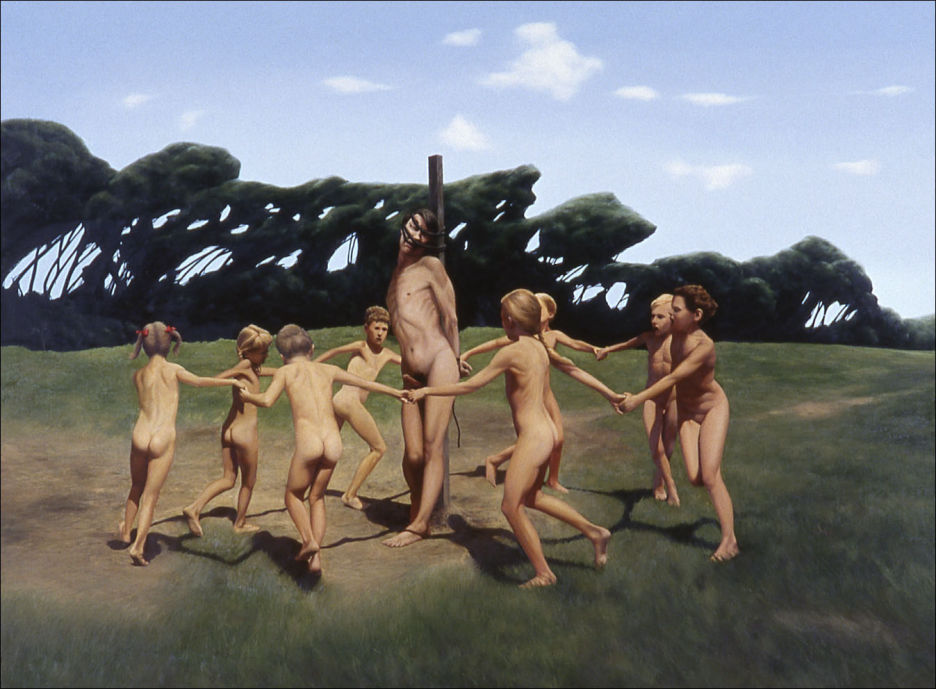